Production designing of ‘Angrej’ was a real challenge

Soon to be released periodic Punjabi flick ‘Angrej’ is set in 1945 Punjab, the set and costume design of the film took the most time

Releasing on 31st July Punjabi film ‘Angrej’ is going to take you to the Punjab of 1945. But this journey back into time did not come so easy. A lot of hunting and research took place before the final draft of the set and costume design of the film. For this project the production design was being handled by Raashid Rangrez who won the National Award in 2007 for his art direction in Punjabi film Waris Shah-Ishq Da Waaris. From the real ground to the fabric of the costume, each step was quite a struggle because authenticity was in question. 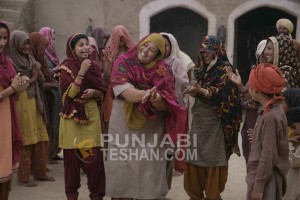 As per Raashid and director Simerjit Singh the film has been shot in areas of Rajasthan and state border of Punjab. They said, “That was a time when Punjab was not really green. The greenery happened much later during the green revolution. So to be authentic 1945 setup, we had to be connected with earthy look. We chose to shot in areas where there is more of soil and less of greenery.”

Professional team working under Raashid worked initially on the set design. The houses, landscapes, few number of trees, streets were all created as per the story’s requirement. Raashid said, “The love scenes are setup in the background of the village so a plain piece of land wouldn’t have served the purpose. We chose to create our own houses and other infrastructure which involved a much of hard work.” 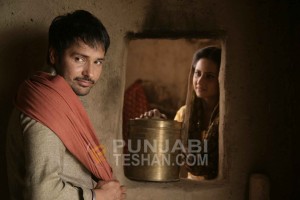 The USP of the film is the costume design and the trivia is that all handmade fabric has been used in the film. Raashid’s team arranged the handmade fabric in white from khadi workers in Banaras, Bikaner, Jalandhar and several other places. He told, “When we have to show a wedding, emotions matter more and emotions are connected deeply with colors. So we were very particular about colors. We worked on white fabric because we wanted to create colors on our own as per the requirement of the script. We kept the colors very earthy and it reflected in the post-production also.”

Raashid told that the shoot was done in almost 40 days which sounds impossible for a period film. He told, “It all depends on the producers. Here we got a lot of support and everything was provided as per our demand. Otherwise a period film is not easy to shoot. Only in 10% cases we get the desired location, and in other 90% cases we have to create the location and many other elements.”

The film stars Amrinder Gill, Ammy Virk, Binnu Dhillon, Aditi Sharma, Sargun Mehta and Sardar Sohi. It has been directed by Simerjit Singh who has been working in the film industry from last 15 years and has many credits to his name. Amarbir Singh Sandhu, Jaspal Singh Sandhu, Aman Khatkar & Sameer Dutta have produced the film while Sukhjinder Bhachu, Amber Deep Singh & Karaj Gill are the co-producers. Amber Deep Singh has penned the story.

Punjabi Teshan : MOHALI (20th September 2022):The movie trailer that everyone has been eagerly awaiting is finally here. Yes, the Babbe...

‘MAA DA LAADLA’ sachi vigad gya; NEERU BAJWA AND TARSEM JASSAR THANK THE AUDIENCE FOR THEIR RESPONSE TO THE FILM

Punjabi Teshan : MOHALI(18th September 2022):The record-breaking film "Maa Da Laadla" is over the clouds. This comedic drama, starring the... 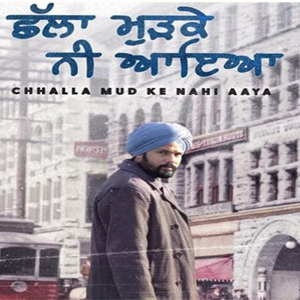